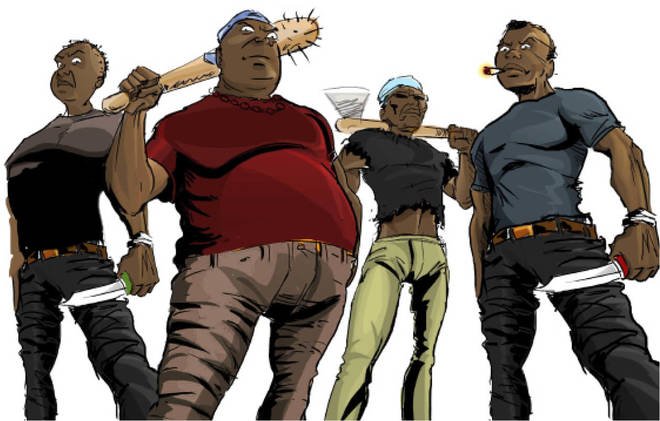 Gangs of youth are on an alarming rise in parts of Kaduna State, engaging in deadly clashes amongst themselves, and unleashing terror on innocents, as well. Recently, there was a spike in their activities, as Daily Trust on Saturday reports. 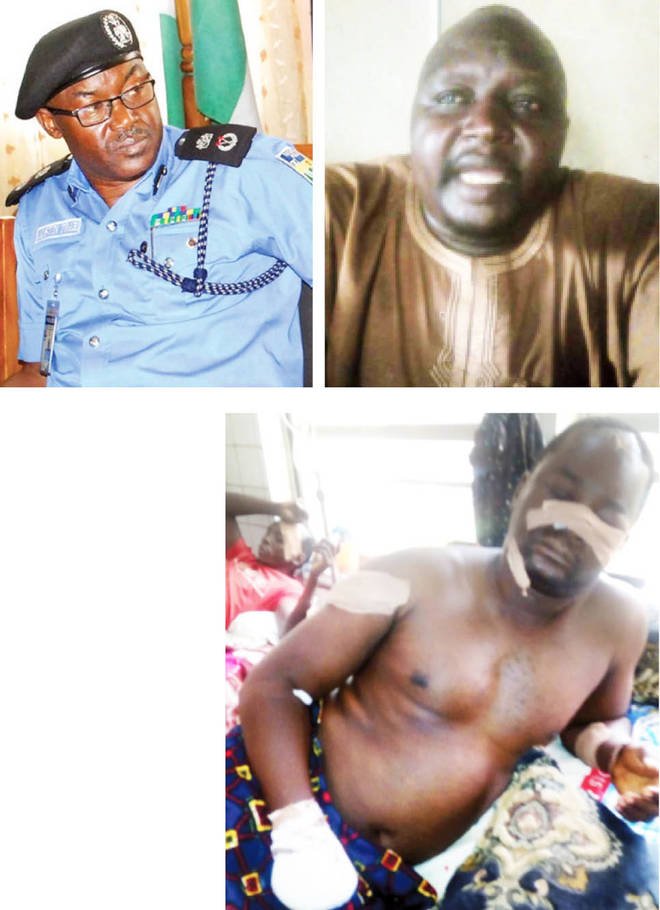 Malam Sani Galadima, a resident of Kwaru in the Badarawa area of Kaduna came out of his house at about 8:30pm on Monday, to buy bread. He was compelled to come out of his house by that time to save his children the trouble of having to come out early the next morning to look for items for their breakfast. But as he was walking down the street, he saw a group of boys heading towards him. Not giving it a second thought, he proceeded on his path but the youths soon confronted him and before he knew what was going on, he had been stabbed on the face.

When they wanted to stab me for the second time, I used my right hand to defend my face, so the machete cut my wrist,” he said.

Galadima, who lost much blood before he was taken to the hospital, happens to be one of the many victims of gang attacks, from groups known as Sara-Suka (Hausa for ‘Hack-Stab’) or Yan Shara (Hausa for ‘Sweepers’) in the Kaduna metropolis. Their activities have become increasingly worrisome to the government, security agencies and residents in recent times.

Residents of many parts of Kaduna confirmed that such attacks escalated during the recent Easter break, where members of various youth gangs mobilized in their hundreds and attacked many communities in Kaduna.

Kwaru community, in Malali, alone recorded four of such deadly attacks within four days, making it an average of one attack per day. Several people, including Galadima, were injured with others like Auwalu Abdullahi, Muktar Abdullahi and Ibrahim Usman who were also attacked in separate incidents.

Some victims of the gang violence are currently receiving treatment at the Intensive Care Unit of a government-owned hospital.

Mostly armed with dangerous weapons, the gang members also carry out robberies, as well as snatching money and valuables from people using tricycles, a popular means of transportation in the state. They are found within communities like Tudun Wada, Rigasa, Nasarawa, Unguwar Mu’azu, Zango, Jos Road, Tudun Nufawa, Sabon Gari, Unguwar Sanusi, and others.

Daily Trust spoke with victims, and gleaned that the gangs are made up of jobless youths within the age bracket of 16 and 21, who just band together in particular areas. “They move in packs, even when sent on errands by parents or guardians, and they hang out together. But now, it’s spiralled into violent crimes, no doubt fuelled by other vices,” said one of the residents who pleaded for anonymity.

Checks by Daily Trust revealed that when they start to engage in violence, they don’t particularly set out to rob people, but get carried away. Others say the youths are usually under the influence of hard drugs. “Because they are idle, they look for substances to make them high in the day time and once they get it, they can do anything,” said a resident of Kawo.

The attacks are not restricted to members of the public, as the gang members sometimes turn on themselves or rival groups, resulting in bloody clashes that sometimes even result in death.

The Commissioner of Police, Austin Iwar, in February vowed to address the problem squarely and urged communities for support. “We are using this medium to send note of warning to all of them, we are giving them one to two weeks to recant and make themselves available for good work. We are telling them in their own interest to drop any negative work they are doing,” he had said.

Head of the Kawo Elders Forum, Usman Dan-Tudo, had informed the police commissioner that the Sara-Suka gangs have become a major threat, adding that no fewer than 100 persons have been killed by the murderous groups in the last two years. Since then the police have been on the trail of the gang members and their leaders. The Kaduna Police Command on Monday, arrested 23 persons in connection with the alleged killing of a gang member on Sunday, at Kawo.

Police Public Relations Officer, ASP Muhktar Aliyu, explained that the gang member, Ibrahim Ashiru, 27, was killed when he allegedly claimed to have renounced his membership of the gang.

A resident of Badiko recalled that some gang members had started a fight at the entrance of her house last Wednesday where they snatched some mobile phones and caused pandemonium, because of the menacing weapons the youths, mostly in their teens, were carrying.

It was also gathered that a tricycle operator along Jos Road, in Kaduna metropolis, was on Wednesday shot dead for aiding some gang members. He was said to have conveyed gang members to different parts of the state where they undertook their nefarious activities, after which he was paid.

At Tudun Wada, they have been terrorizing residents while many lives have been lost as a result.

Shehu Umar, a resident of Sabon Gari, told Daily Trust how his friend was injured by the gangs at Tudun Nufawa. “My friend parked his motorcycle to fuel it along Yola Road around 8:00pm last week, when three youths appeared. One of them grabbed the motorcycle, and as my friend tried to wrest it back, one of them pulled out a knife and stabbed him on the lap. As I speak to you he is at home receiving treatment after spending days at the hospital.”

A squabble between rival gangs erupted in Tudun Wada, between the Yan Sulhu, and Yan Ba Sulhu groups, ending up bloody. The two groups have been attacking themselves for years now. All efforts from security and community leaders to stop the rivalry failed as the youths continue to fight each other.

Another resident of Sabon Gari said he witnessed a bloody clash between two gangs, along Kano Road in Kaduna metropolis, a central, busy area. “They are dangerous to themselves, and others. I saw some people get stabbed during the fight. Government needs to end their activities,” he said.

Another resident said it is better to avoid the gang members, than confront them. “Anytime I see a group of youths walking on the street at night, I get apprehensive. In fact, we are living in fear in this community,” he said.

Daily Trust gathered that in Kaduna South, and parts of Chikun LGA, youths who have grouped themselves into gangs operate like cultists, wreaking havoc. It was gathered that on many occasions, they carry out reprisals on whoever attacks their groups.

A resident of Trikania recounted: “About three days ago, one of the gangs attacked a youth at Dadinkowa and injured him gravely on his head, while struggling to snatch his belongings from him. The young man is yet to recover,” she said. “These boys engage in snatching of motorcycles, handsets, burgling homes and in some cases they kill, especially when they meet resistance. In addition to the dangerous weapons they operate with, they also patronize herbalists who give them charms which they tie around their arms, waists, and so on,” she added.

Another resident told Daily Trust that the gangs are powerful, armed with weapons and hardware, with which they break into homes. “They are also into drugs, and that is why they can do anything once they are under the influence of drugs. Recently, some of them broke into a three-bedroom flat at Ungwar Teke in Chikun LGA and carted away all the valuables. But it is disheartening that when they are arrested, they are quickly released back to the community and they go after whoever worked towards their arrest,” he lamented, even as he commended the Civilian JTF for their efforts.

Findings by Daily Trust revealed that the various gangs sometimes leave their communities to others to operate. “They rob, vandalize government properties such as electrical cables, and even steal building materials from sites,” said another resident who preferred anonymity.

The Commander of Civilian JTF in Kaduna South LGA, Mohammed Gwadabe, who spoke with Daily Trust, confirmed an increase in the rate of gang-related violence. He said, “Over time, the activities of dangerous gangs subsided in the area but as the nation’s polity is gradually getting heated, they are re-surfacing and have started wreaking havoc. About five days ago, two of them were caught when they went to steal armoured cables at the Arewa Textiles factory, close to Kalapanzin Barracks in Kakuri. The two gang members nabbed are Bako from Rigasa, and Mohammed Kwalibado, and are still in police custody. Mohammed was one of those who killed the former Civilian JTF Commander in Kakuri.”

Gwadabe added: “Because they are afraid of us, they go far from where we are to carry out their evil plans. They are seriously into stealing now. In the last one week, they have stolen armoured cables from Babandodo, Galadimawa and Arewa Textiles, all at Kakuri, in Kaduna South LGA.” Speaking further, he said the challenge they face is that when the gang members are arrested and taken to the police station, they get released soon after. “This is quite demoralizing. We don’t have Sara-Suka here, but thieves. The gangsters we have here are into big time stealing and vandalization.”

Gwadabe listed another problem: “They have buyers for anything they steal and they get cash immediately for stolen properties. So, we want government to assist us so that we can face them. They are like a cult, and they operate in large numbers. They even wear uniforms, for whenever they want to carry out coordinated attacks. They also invite their fellow gangs from other areas to join them.”

Gwadabe appealed to the state government to support the Civilian JTF, and also to parents to be responsible, that they are not helping matters because they don’t probe their jobless children who are living flamboyantly. “Your child is not working yet comes home with huge sums of money, wears expensive clothes and you don’t ask questions; you are also aiding crime. The police has been helping us but there are some officers who compromise. But the present DPO of Kakuri is really cooperative,” he said.

In 2015, the police arrested 16 suspected members of Sara-Suka who attacked Rigasa, and killed one person. Also, former commander of the Civilian JTF in charge of Kakuri, Buhari Ahmadu Tanko, was killed by an armed gang in August 2016, while in 2017 they attacked motorists and other pedestrians and burnt many houses while coming back from an occasion at the Murtala Square in Kaduna.

Affected residents are still living in fear, and on edge, with no apparent end to the gang wars that sometimes turn deadly, and claim innocent, law-abiding citizens