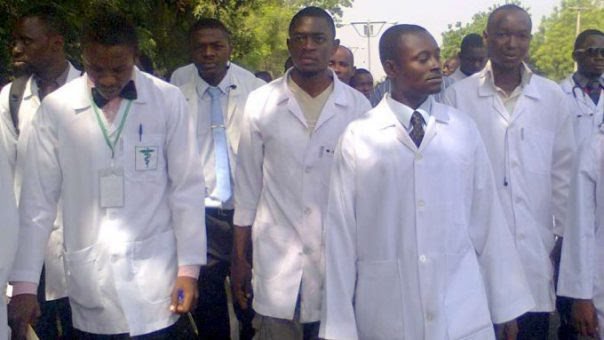 Nigerian doctors have threatened to withdraw their services across health institutions in the country if the federal government accedes to the demands of other health workers who have been on strike the past three weeks.

The strike by JOHESU( Joint Health Sector Union) has crippled healthcare delivery across the country, and has left millions without care.

The doctors, who are opposed to salary adjustment and harmonisation, one of the major demands of the striking health workers under JOHESU, said the warning became necessary as state and local government workers had been directed to join the JOHESU strike in a bid to force the government to act.

When the strike began on April 17, the Nigerian Medical Association, NMA, in an apparent continuation of the rivalry among health workers, described JOHESU as an “illegal body” and urged the government to ignore its threat.

On Thursday, the NMA in a statement signed by its newly elected president, Francis Faduyile, said it reached an agreement with the government in 2014 not to accede to demands of other health workers relating to salary adjustments and harmonisation.

“It is also pertinent to once again remind Government about the concluding part of our letter no. NMA/PRE/SG/03/0751 of 21st March 2014, which states, “In view of the above, the NMA painfully wishes to inform the Federal Government of Nigeria that any award to the non-medically qualified health professionals that violates the January and July agreements of 2014 shall result in the resumption of the suspended withdrawal of service of 2014. Please take this as a notice sir”.

“The above reminder is predicated on the extension of the ongoing strike action embarked upon by the amorphous body called ‘’JOHESU’’, to States and Local government areas, the basis of which is to strengthen its callous and ill motivated agitation for pay parity between her members and doctors with the resultant erosion of relativity and further hierarchical distortion in the health sector vis-à-vis her clandestine romance with some top government officials.

“For the avoidance of doubt, the Nigerian Medical Association wishes to restate her positions on the various demands of JOHESU:

“We oppose vehemently, any adjustment in CONHESS SALARY SCALE with resultant pay parity between doctors and healthcare professionals allied to medicine, and hereby reaffirm that relativity is sacrosanct,” the statement read in part.