Credible reports have emerged that some agents of the All Progressive Congress (APC) are inducing voters by buying their votes.

According to Sahara TV, before casting their votes, voters were directed to a house not far from the polling unit, covered with posters of Isiaka Oyetola, candidate of the All Progressives Congress (APC).

See video below which show electorates lining up to get paid. 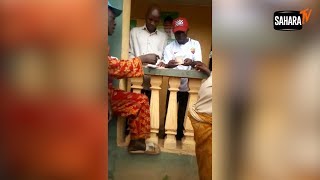 However, the recording could not be completed as the party agent became suspicious of reporters, so they told the voters to leave for the moment and return within the next one hour.